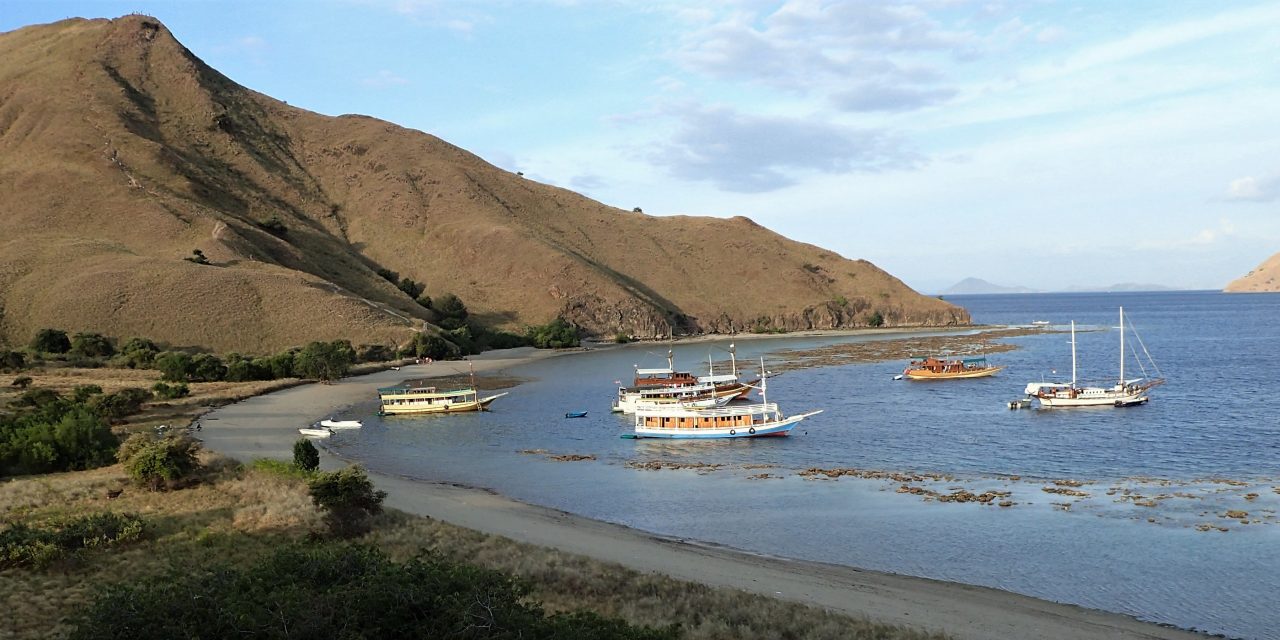 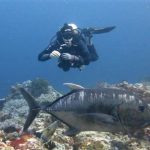 Sunrise dive to Crystal Rock to try and catch some good shark scenes. Andy picked our time and entry point well as we dropped into the North side which was very sheltered and for most of our dive we had the site to ourselves. Andy had explained to us in our briefing that if he felt the time was right he would ‘scratch/ bang’ an empty plastic water bottle to disturb the fusiliers. As a school of these rise through the water the sound they make attracts Jacks and Giant Trevally which in turn can attract sharks. 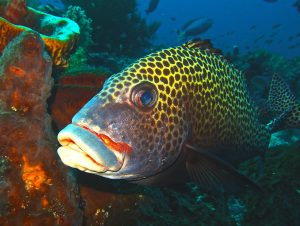 Well the ‘trick’ work. It was great to see this ‘drama’ unfold. Mike was the first to see a couple of white tip reef sharks circling in behind us and then a larger grey reef shark. The deal is to stop the plastic bottle agitation when the sharks appear so they don’t mistake you for prey!

It is difficult to describe this dive. To me the best sense it to say it felt like this was the type of environment that a world class aquarium would try to create and that this is the perfect site to give them inspiration and something to aim for. This goes for structure, (rocky outcrops, soft and hard corals) as well as the mix and sheer volume of fish.

As we were moving to our safety stop close to the top of the rock we came across a large school of powder blue surgeonfish. It was wonderful to be among these as they came right up to us, swam round us and then made their way through a cleft in the rocky top as we were swimming over it. Notable sightings included:

Our second dive was back to Crystal Rock. This time we dropped in on the north side of the main rock. Another spectacular dive. Slack current so I was able to enjoy taking photos especially in the shallow waters. Got some great footage of a scorpion fish on the move. Nearby a Titan Triggerfish was being very photogenic for Mike moving and breaking coral to get at the buried eggs ??. This caused other large fish to come in and circle to try and get a piece of the action as well. Clearly lunch time as Mike also found a blue spotted ray in a gully eating. We tried to attract the sharks again but no luck. However the other fish arrived in abundance and I got some excellent footage. A number of great action scenes. This dive was very beautiful in particular at the end largely due to bright sunshine highlighting the corals and tropical fish, in particular the smaller reef fish which we did not see as many of in the morning. 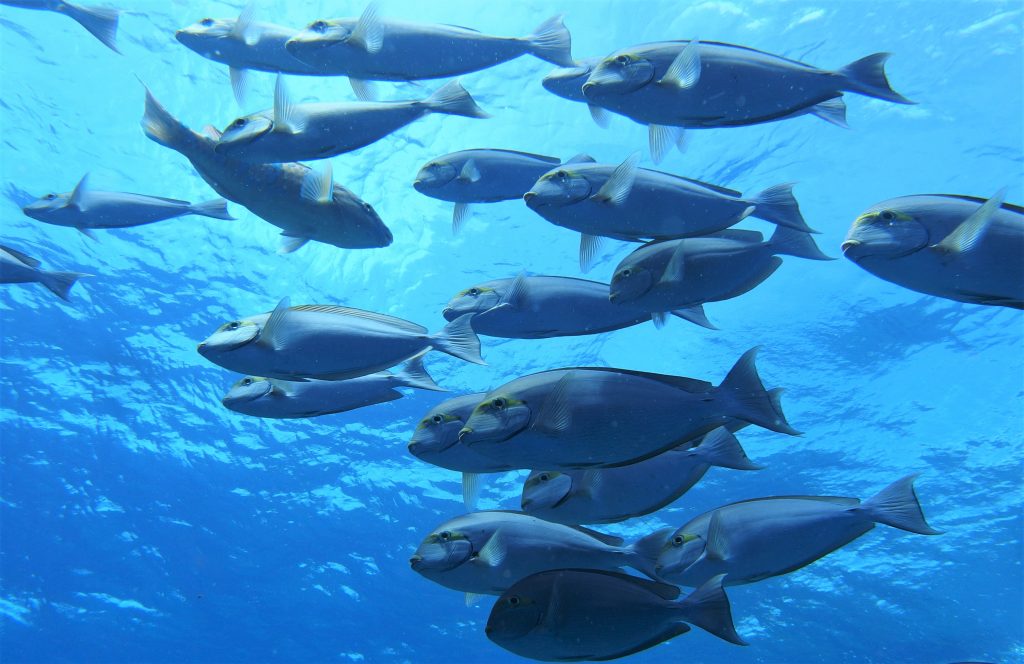 Schooling GT in the current 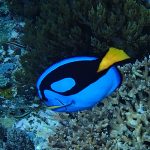 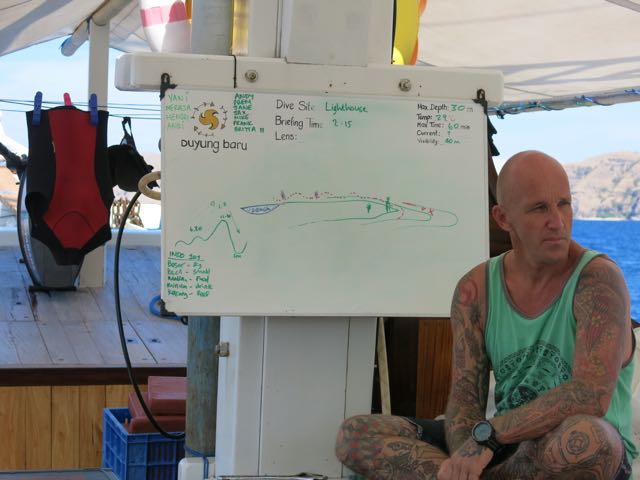 Our divemaster Andy, and dive map

As with all our afternoon dives, this was done in a strong falling tide. Up to now the current has been very strong and to be honest I was not looking forward to this dive even though it would be a drift dive. As it happened when we got out to the site Andy decided that the current was too strong after popping his head in the water to see how the fish were behaving (chaoticky was the verdict…) and we needed a change of plan. We went round the east side of the Lighthouse promontory on Lawalaut and he tested the current again. Green light given, new plan revised to be a drift southwards down the west coast of the Island.

We got the privilege / pleasure of naming this site and Prem suggested Eagles Nest as on the disused Lighthouse there was a large nest on the top of it used by eagles. We saw one take off from it and a couple of others circling. A nice name, not sure it will stick in the dive community here but it brings back good memories for me. 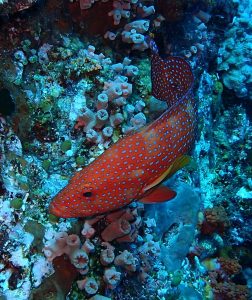 What a great dive, Andy has not done it before so he was not totally sure what to expect, we didn’t know this at the time (He had previously told us that most of the discovery dives don’t really work out because the better dive sites are already well known).

We were on the sheltered side of the island from the tidal fall which was flowing North to South and so the tidal current was not strong and we could gently drift along. We had a rocky coral encrusted wall to our right dropping down to a sandy / rubble bottom at c.25m. Close into the dive I saw a Stargazer Snake Eel. I only noticed this because his jaw closed which looked like a shell shutting. I thought it was a scorpion fish but when Mike came to take a video it had gone. Looking at the book after the dive I Identified it as a Stargazer Snake Eel. Discussed with Andy and he agreed.

As we drifted we saw a couple of rays which felt really special and then came to a pinnacle rock outcrop with wonderful glass fish schooling round it. Just beyond this was a sandy gully (c.28m) running up the slope cutting between the rocky coastline. Absolutely stunning we saw a group of 7 different rays including stingray, marble ray, Jenkins whiptail, Leopard ray, Thorny Stingray. I hunkered down on the sand and watched the rays rise from the sand as we approached them. They were very relaxed and Mike (on video duty) got within a couple of feet. Absolutely wonderful experience.

Rest of dive continued to be a very enjoyable experience. We ascended gradually and I saw another shark that had been resting on the sandy bottom rise up and swim away. Unfortunately I had shown Mike a giant clam which he was looking at and so missed this. At shallower depths there were lots of coral outcrops with small fish which were fun to explore. 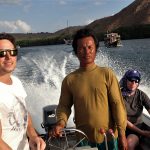 As our penultimate experience of the day we motored back to the Cauldron and donned our snorkels. It was great to go over the Cauldron lip, quite a surge, and we also saw a Manta Ray swimming through the channel.

Here is a link to my YouTube video Komodo Day 4 . Below is a compilation of some photos, press play to see them. 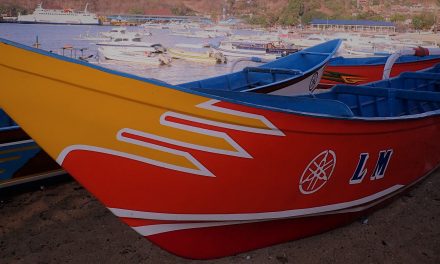 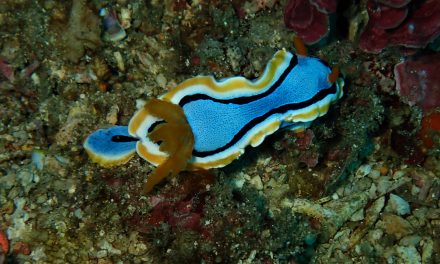 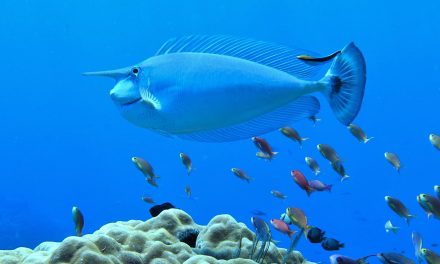 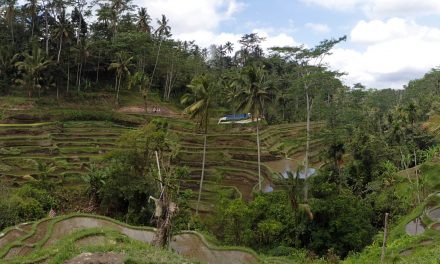