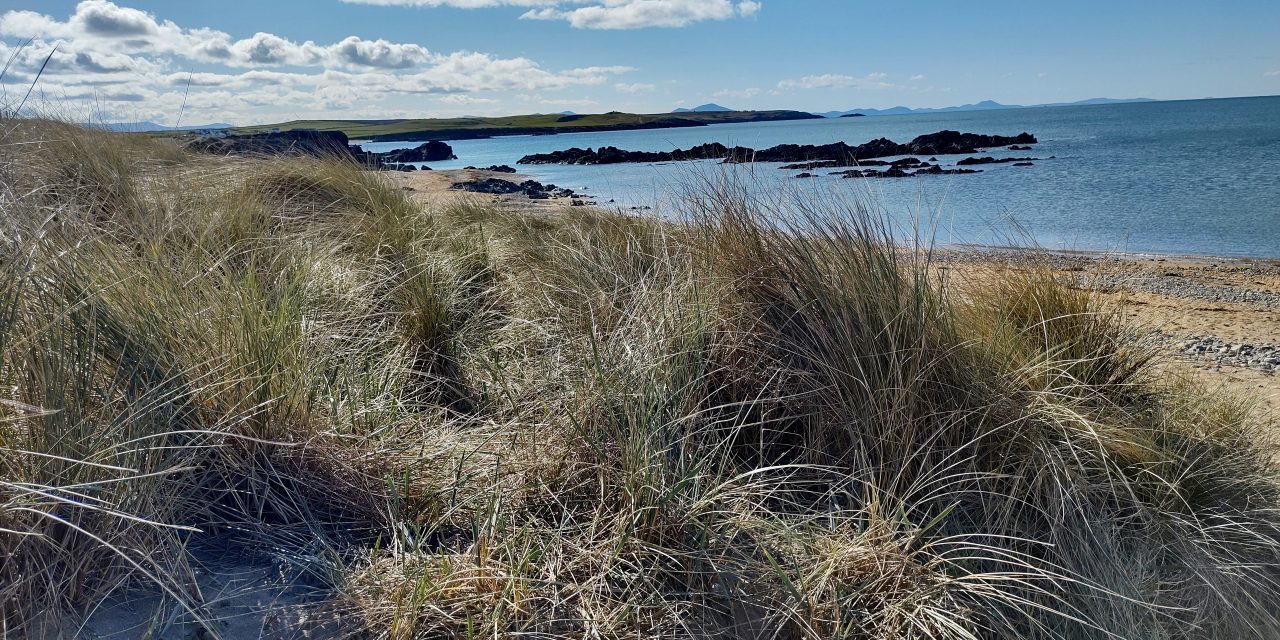 One of my goals, is to walk round the Anglesea coastal path during 2021. The full trail is 210km, and we will do it in sections in no particular order, hopefully camping on some quieter stretches. To that end we kitted ourselves out with new lightweight camping kit as all of our existing stuff is inaccessible in South Africa whilst the travel restrictions are in place. Now we just need some good weather.

Anyway Saturday 10th April looked to be a beautiful, if slightly chilly day and so we planned a day hike to kick ‘the Challenge’ off. One of the great things about Anglesea is that it is well served by local buses. So we decided to park at Aberffraw, get the bus to Rhosneigr (after topping up on some chocolate treats) and then walk back to ‘A’. Main reason for doing it this way round was as the wind would be off our shoulder rather than in our face. Also prefer to get a bus to the start rather than hope to time the hike to catch one at our end point. Any way the travel arrangements all worked out well.

We were dropped by the railway station stop at ‘R’ and after struggling to find our way through the caravan park, we found the footpath round the top of LLyn Maelog which meant we did not have to walk through the town. Apparently LLyn Maelog has the status of Village Green, the only lake in Wales with such standing. A thriving shipbuilding industry used to exist on the shores of the lake, once completed they were floated on a man made channel to the sea. Now it is a special place for birdlife and plants.

We soon reached the coastal path and enjoyed the dunes, walking along the beach and looking out to sea. Very beautiful section of sandy shoreline. Ahead of us on the first headland we noticed a strange structure, looked a bit like a WWII bunker. Went over to investigate and glad we did. Far from being a bunker it is a ‘restored’ Neolithic period burial chamber (Barclodiady Gawres) link to more info.

Continuing on our hike we came across an older gentleman and stopped to chat for a few minutes. He mentioned that the cove we were looking down upon Porth Trecastell, better known as Cable Bay. Apparently this was where in 1902 a telegraph cable was laid to link to Ireland and then on the the USA (since decommissioned)

From here our trail took along the tops of low cliffs, decided to stay on the route along the shore for as long as possible so we made our way on a less formal path round below the disused live firing range before turning back at the fence surrounding the perimeter of the Anglesea Racing Circuit and making our way back to the Coastal Path which heads inland for a short way to avoid the Circuit. Was glad we did this during lockdown and the peace of our hike as not spoilt by the noise of cars racing round. Returning to the coast at Porth China we were happy to see that we would be able to walk across the rocky causeway to the tiny church on the island which is cut off at high tide.

Again we were very lucky as no-one else was around so we could enjoy the solitude of this special place. We found a bench at the far side of the church, sheltered from the wind, in the sun looking out to sea. Perfect spot for our picnic lunch. A couple of small terriers soon appeared, didn’t seem to belong to anyone and fortunately we had finished the sausages as they were very interested in the smell! See a short history of the church in the following link history . As we left more families and couples were walking round the bay from Aberffraw, and across the causeway. So very happy with our timing.

The path continued on the low rocky coast round the headland giving us good views round the Bay and the opposite shore. We could also see across to the mountains on the mainland, still with a smattering of snow on them. Must say as I write this on May 6, we still have snow on the hills! Had one beautiful week when we went up to the Lakes and then it has been unseasonably cold and wintery. Lets hope it warms up later this month for our planned trip to Scotland.

One of the highlights of the hike was still to come, the estuary of Afon Ffraw with the sandy beach on the other side of the tidal river from us was really beautiful. Lots of families out, kids and dogs paddling in the river and generally having fun. Great to see people out as lockdown starts to lift.

From my guide book (which I got later) it was interesting to read that this small town used to be the administrative centre for the kings and princes of Gwynedd.

There was a royal palace here of which alas there remains no trace as it was built from wood and destroyed by the Vikings in 968, and remains used later to repair Caernarfon Castle in 1317 due to a general shortage of timber at that time. So interesting to learn some of the history of the area we now live in.